Mechanisms of RNAi and non-coding RNAs

Since its relatively recent discovery, RNA interference (RNAi) has emerged as a potent, specific, ubiquitous and programmable means of gene regulation. Through a number of pathways that are conserved from S. pombe to humans, small non-coding RNAs direct molecular machinery to silence gene expression. We focus on the mechanisms and machinery that govern RNA silencing.

During RNAi, long double-stranded RNA is processed by Dicer to yield short (~19-24 nt) double-stranded RNAs that trigger the RNAi response. These short RNAs get incorporated into effector complexes called the RNA Induced Silencing Complex (RISC). The short RNA (siRNAs or miRNAs) then acts to guide the RISC complex to its target through base complementarity. In all cases, these complexes contain a small single-stranded RNA and an Argonaute protein.

Several years ago, we determined the first structure of a full-length Argonaute protein (link to PDB or structural model and paper). This archael protein was composed of four domains: N, PAZ, Mid and PIWI. The structural similarity of the PIWI domain to RNase H-like nucleases revealed Argonaute as the key effector protein in the RISC complex as it was identified as Slicer – the enzyme that produces the endonucleolytic cut in an mRNA when the guide and target mRNA are fully complementary. This places Argonaute at the heart of this pathway.

With our ability to reproducibly purify unbound human Argonautes 1 and 2 (hAgo1 & hAgo2), we were able to specifically load these Argonautes with discrete miRNAs, and determined structures of these complexes (links). We showed how miRNAs bind extensively to Argonautes and detailed the effect they have on the protein’s stability. We were also able to convert a catalytically inactive, non-slicing Argonaute (hAgo1) to an active slicer. Human Argonaute-2 in complex with miR20a RNAi in the germline

Another clade of Argonautes, the Piwi proteins are of particular interest since they associate with a specific class of small RNAs, the piRNAs. These molecules reside in germ cells and protect their genomes against instability caused by mobile genetic elements. Unlike siRNAs and miRNAs whose biogenesis depends on Dicer, primary piRNA biogenesis is independent of Dicer. Rather, long ssRNA transcripts are parsed into smaller 5’- monophosphorylated fragments. The piRNA precursor then appears to be loaded into its Piwi-family partner. The 3’ ends of the piRNAs are then formed by a Mg2+-dependent trimming activity. piRNAs can be amplified in a feed-forward ‘ping-pong’ mechanism, carried out by two different Piwi proteins, generating so-called secondary piRNAs. Once mature piRNAs are loaded into Piwis, the resulting effector complexes are able to direct silencing at either the transcriptional or post-transcriptional level.

We showed that an enzyme called Zucchini is a single strand-specific nuclease (link). Our crystal structure of mouse Zucchini (mZuc) revealed a long, positively-charged groove with zinc finger motifs at each end that can accommodate single-stranded nucleic acid substrates. mZuc displays a striking architectural similarity to HKD nucleases and is consequently dissimilar to HKD lipases. These findings implicate Zucchini as a primary piRNA biogenic nuclease perhaps being responsible for generating the 5’ ends of primary piRNAs.

By using structural biology, biochemistry, biophysical techniques, along with functional studies, we seek to determine the role of various factors that are critical for gene silencing in the germline.

Let-7 is among the first miRNAs discovered, where it is involved in controlling cell fate during late stage larval development in C. elegans. The let-7 family is broadly expressed in somatic cells and regulates cellular proliferation and differentiation, as well as the repression of several oncogenes and key regulators of mitogenic pathways. The Lin28 protein was discovered to be the post-transcriptional regulator of let-7 biogenesis. Lin28 is highly expressed in embryonic stem cells and is naturally active in early development where it suppresses the expression of mature let-7 to maintain pluripotentcy. The Lin28-let-7 pathway has been described as a bistable switch. Each molecule represses expression of the other, and once the cell changes its state, the result is differentiation, or if the switch is reversed, cancer.
In differentiated cells, TUT4 and TUT7 promote let-7 processing by monouridylating certain let-7 precursors (pre-let-7) that carry a single 3’-nucleotide overhang, rather than the more Dicer-ready two-nucleotide overhang pre-miRNAs. However, in stem cells, Lin28 binds to pre-let-7, which triggers 3’ oligouridylation by TUT4/7. The oligoU tail serves as a decay signal that is rapidly degraded by Dis3L2. We determined the structure of Dis3L2 in complex with an oligoU RNA to mimic the uridylated tail of pre-let-7. The RNA-binding domains form an open funnel on one face of the catalytic domain that allows RNA to navigate a path to the active site. An extensive network of uracil-specific interactions span the first 12 nucleotides of the oligoU-tailed RNA, explaining how Dis3L2 recognizes, binds and processes uridylated pre-let-7 in the final step of the Lin28-let-7 pathway. We continue to investigate this important and fascinating pathway. 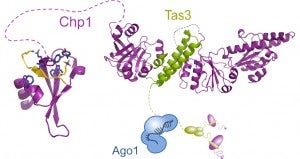 Chp1 and Tas3 form a bridge between chromatin and the RNAi machinery. The
chromodomain (CD) of Chp1 binds H3K9 methyl marks on nucleosomes, while the
GW domain of Tas3 binds to Ago1.

RNAi pathways are also used to repress genes at the transcriptional level by guiding heterochromatin formation. These pathways are most fully characterized in in the yeast S. pombe where heterochromatin is essential for kinetochore assembly and consequently for proper chromosomal segregation during cell division. Assembly of centromeric heterochromatin requires the RITS complex, a specialized RISC, which physically anchors small RNAs to chromatin. It consists of the Argonaute protein Ago1, the chromodomain protein Chp1, a GW-like protein Tas3 and siRNAs derived from centromeric repeats. We characterized Chp1’s high-affinity binding to chromatin and showed it to be critical for establishment of centromeric heterochromatin. Our structure of the C-terminal half of Chp1 with the Tas3 N-terminal domain, revealed the presence of a PIN domain in Chp1, and showed that it contributes to post-transcriptional gene silencing of subtelomeric transcripts independent of RNAi. We suggested that Chp1-Tas3 provides a solid and versatile platform to recruit both RNAi-dependent and RNAi-independent gene-silencing pathways for locus-specific regulation of heterochromatin, and that the reach of long and flexible regions in these two proteins might be important for contacting other nucleosomes at these loci. The RITS complex recruits the H3K9 methylase, Clr4, which is part of a large complex called CLRC. We are elucidating the functions of components of this complex.

Small RNA and tRNA surveillance by the CCA-adding enzyme

Transcription in eukaryotes produces a number of long non-coding RNAs (lncRNAs). Two of these, MALAT1 and Menβ, are well-characterized, long, nuclear-retained, noncoding transcripts that are involved in cancer progression and paraspeckle formation and generate a tRNA-like small RNA in addition to the mature lncRNA. The stability of these tRNA-like small RNAs as well as that of bona fide tRNAs are monitored by the CCA-adding enzyme. Just as for bona fide tRNAs, the trinucleotide CCA is post-transcriptionally added to the 3’-end of mascRNA (MALAT1-associated small cytoplasmic RNA), the tRNA-like transcript originating from the 3’-end of MALAT1. The Menβ acceptor stem is destabilized through mismatches or wobble base pairs, prompting the CCA-adding enzyme to repeat its catalytic cycle. The resulting CCACCA tail then serves as a degradation signal for the cellular RNA decay machinery. It appears now that many bona fide tRNAs that are destabilized through mutations or the lack of proper modifications are subjected to a similar CCACCA addition. Thus, CCA addition likely plays a central role in tRNA and tRNA-like small RNA quality control.
We investigated how the CCA-adding enzyme distinguishes structurally stable RNAs from unstable ones so as to only mark unstable RNAs with CCACCA. We found that after the first CCA cycle, nucleotide binding to the active site induces the enzyme to apply torque on the RNA. A clockwise screw motion of the enzyme’s catalytic domain leads to RNA compression and overwinding. This causes unstable RNAs to extrude a distinctively positioned bulge from the acceptor stem while still bound to the enzyme. We found that tandem CCA addition is not the result of a modified enzymatic activity that is particular to unstable RNAs. Rather, it is a consequence of the natural activity of the CCA-adding enzyme on a substrate with increased conformational flexibility. By exploiting the versatility of RNA structure, the CCA-adding enzyme is able to trigger the degradation of potentially detrimental small RNAs and tRNAs. (mechanism figure). RNAs proofread themselves through differential responses to the CCA-adding enzyme